Back to Enjoy Luton

The first ever Pride in Luton takes place on Saturday 25th June, we’re so excited to be sponsoring this amazing event and can’t wait for the celebrations ahead. This is a particularly special year, commemorating 50 years since the UK first Pride march and a momentous chapter in Luton history, with Luton’s first ever Pride.

From Drag performers, singers, dancers, theatre groups, this will not only be a historic occasion, but a day full of fun and laughter for all to enjoy and celebrate. Make sure you’re in the Hat District this Saturday from 1pm to take part in a full day of celebrations.

Taking place in the Hat District from 1pm – 7pm, Asifa Lahore will guide you through a host of entertainment and speeches on the main stage

Homography is a performance festival, taking a cloers look at the various non-normative representations associated with sexual dissidence.

Asifa Lahore is Britain’s first out Muslim drag queen, pushing the boundaries of what it means to be LGBT, South Asian and Muslim.

Asifa came into the national spotlight in 2014 when she was censored by the Birmingham Central Mosque from discussing Islam and Homosexuality on BBC Free Speech.

Jaymi Hensley is a Lutonian born and bred and member of the boy band Union J who formed in 2011, originally known as Triple J. Consisting of Cuthbert, Hamblett and Hensley the group met on the show The X Factor where they finished fourth and were signed to Sony Music subsidiary RCA Records.

Their debut single, Carry You, was released in June 2013, with their self-titled album following in October 2013 and peaking at number 6 in the UK Albums Chart.

On January 2022 Union J confirmed they would be reforming to celebrate their tenth anniversary.

Queen of the universe herself, the fabulous La Voix headlines Pride in Luton this Saturday, global superstar and the UK’s funniest red head. Expect mesmerising impressions of the worlds biggest divas, leaving you with a belly full of laughter, this will be one performance you don’t want to miss.

And Headlining is La Voix, Queen of the Universe

In the Hat Factory:

A host of community stalls including:

Arts and crafts throughout the afternoon

Asifa Lahore will be playing the best pride party anthems on the Factory Floor.

A special youth zone for 13–18-year-olds to meet with peers, take part in activities and seek advice.

Food for all to enjoy, suitable for all dietary requirements.

Creative vision for this year’s Pride in Luton poster:

The creative vision behind this year’s Pride in Luton Poster, Ashton Attzs. Attzs is a queer, black, Luton-based artist. Their paintings and illustrations are a vehicle to empower the everyday person. Using dreamy blues and cotton candy pinks against charmingly distinctive, racially and gender-diverse animated characters to create bold, joyful and unapologetic work in style and message.

Attzs has been commissioned by Instagram, Red Nose Day, Tate, Tottenham Hotspur FC & Universal (just to name a few). In 2018, Attzs won the coveted Evening Standard Art Prize for their painting of transgender swimmers, “Don’t Stay In Ya Lane”. 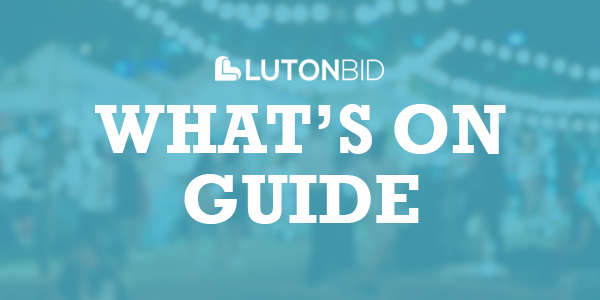 Subscribe to our free weekly What’s On guide for the best place to find events taking place in Luton town centre every Thursday – Sunday.