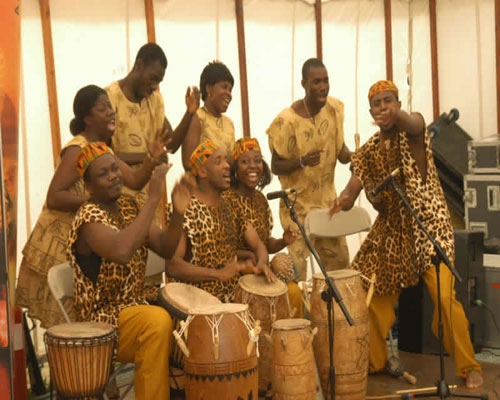 Rock, pop, ukuleles and drumming – the sound of music will be filling St George’s Square on Saturday, 14th April with the return of Luton Live.

Luton Live, an afternoon of entertainment designed to entice families and friends into the town centre, has been organised by Luton Business Improvement District (BID) for the last four years.

First up, taking to the stage at 12noon, will be Luton’s Liam Rowlands whose most recent single, Six Strings, reached number 10 in the iTunes singer-songwriter charts. He will be releasing his second EP later this year.

The second performance, from 12.45pm to 1.15pm, will be The Luton Ukemaniacs, formed in 2017 by Dave Mingay who was bored of playing the ukulele on his own and found that Luton did not have a ukulele group like many neighbouring towns.

The group will also be running two 30-minute ukulele workshops, at 1.30pm and 3pm – so town centre shoppers can try their hand at the instrument, learn the basics and enjoy an impromptu jamming session

From 1.30pm the Osagyefo Theatre Company, an African arts education charity, will run a one-hour drumming workshop. This Luton based group, first launched in 1997, has performed across the UK at theatres and carnivals.

The final act of the day will be Rock Choir, with members from its Dunstable group performing a one hour set from 3pm. Rock Choir has more than 17,000 across the UK, offering adults and teenagers an alternative experience to the traditional, classical or community choir.

Gavin O’Brien, Chair of the Luton BID Board, said: “Our research shows that businesses and visitors alike want more reasons for shoppers to visit Luton town centre and spend more time here. Luton Live is designed to celebrate all that is great about Luton town centre, to help visitors explore Luton and of course, to celebrate our growing cultural and creative offering.”